Well, I think the title sums up the weather we had this weekend. Or rather it under estimates the degree of sogginess and down right torrential rain we had for the whole three days. Admittedly, by Monday afternoon the rain had eased to the point where you could probably stand outside in wet weather gear and not get drenched.

So, this was the backdrop for my parents’ visit. It would have been a whole lot better if the weather would have been nice as we would have been at least able to get out into the back garden and possibly gone for a drive somewhere. However, seeing the current mental and now physical state (due to inactivity) my Mum’s in we wouldn’t have been able to have done much more than that.

The time up with me was a good holiday for my Dad, however. He really enjoyed having someone to talk to and be normal with, it was a great holiday from the mundane he has at home. I’ve now just got the clearing up to do after the visit. 🙂

I’ve not really done anything else recently other than work and the only social occasions on the horizon are the pub quiz on Thursday and going up to visit Lindsey and Andrew the weekend after next for Lindsey’s birthday do.

As for work, I’ve finally got the new firewall in place. It only took Cisco about 8 months to fix the bug in their ASA code so that the traffic inspector no-longer mistook ssh traffic as being some sort of instant messanging protocol. It’s amazing that ssh worked at all! The next job is to get VPN set up and running.

An O.K. weekend. Saturday was mostly taken up with a bit of shopping. Mostly in Virgin Megastore and HMV, where I bought 8 DVDs and the EMI “101 80s Hits” 5 CD compilation. (Not bad set of tracks, only a few duff ones, good value though as it’s only EMI artists a bit patchy.)

Sunday, well that’s a bit of house cleaning, tidying before, in the afternoon driving up to the White Horse Hill near Uffington for a lovely walk along the ridgeway. The binoculars were useful for a bit of bird watching (no, I don’t mean young ladies nobby & Grim) and saw a hovering kestrel and a lark singing away before gliding (O.K. more parachuting) down. Oh and I had a nice 99 cornet as well. All in all a lovely afternoon. 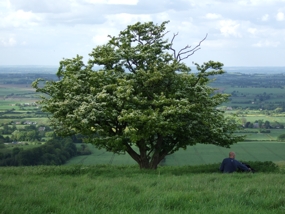 What have I done? It seems that I’ve triggered an invasion of Facebook by the Bullet and Junk crowd.

It’s all very Web 2.0. *ick* Alec should be proud.. though I doubt he’ll be joining in as he’s not written it himself. 🙂

For those who have created the bridgehead I’ve created a Bullet/Junk group so that we can continue the good work of Bullet and not write anything on its discussion board for long periods of time.

Yes, I was a sceptic about the whole social site thing but now that I’ve joined Facebook and have two circles of (real-life) friends joined up to it I have found that it’s become a good way of keeping in touch with people I’d catch up with a lot less often.

Facebook seems to be the academic/graduate version of MySpace. All I’ve done really is post a few photographs of the Tromso trip and a wedding attended and set up an RSS feed from here. Pretty straight forward and you can restrict as much or as little of the information as you wish.

So, have I been having a fun fortnight?

The bank holiday weekend was spent holding the hand of our new mail system at work as I migrated everything over the Friday before (as the migration had been postponed for a week). I did manage to use the £50 John Lewis gift voucher the bloke who took my 380Z gave me and buy some nice, compact 10×25 binoculars.

Last week at work was taken up fixing teething problems.

I did have some fun, however. At the pub quiz last week a television film (or should that be video) crew turned up to film my team as Mick McCarthy had got through to the final of “The National Lottery People’s Quiz”. I also had to do a peice to camera looking enthusiastic and wishing Mick good luck. I’ll probably finish up on the digital cutting room floor as I won’t be in the audience for the final (being filmed 6th June and broadcast 24th June) and if the previous evening’s shoot is anything to go by they’ll use very little of it. The previous evening’s footage had a mere 3 seconds shown.

On Friday I met up with Grim and Holly in Reading, had a nice meal and then watched Spiderman 3. Not as good as the first two but O.K. The rest of the weekend was made up of shooping for clothes and a new pocket camera (Fuji F31fd) on Saturday and getting my GPS talking to my iBook (requiring soldering and a visit to Maplin’s) yesterday.