Just before lunch I changed into my new kilt and gubbins for the first time. It certainly felt different to the "kilt" supplied with the highland costume especially its weight and the way the sporran weighed on the front. Still, it wasn’t uncomfortable and, as it fastens around the stomach rather than the hips, acts as sort of corset. Maybe I just had it a little too tight.

Again, it was a little disconcerting to begin with but that soon faded.

Anyway, I toddled over to the University Club for lunch and the regular Tuesday game of Mahjongg. The women who serve the food, who I often banter with, seemed quite amused by the kilt so I took the opportunity to publicise the sponsorship by giving them a slip of paper with the details on.

Sitting down with such a voluminous (8 yard) kilt is interesting in a canteen chair with arms. They’re just not designed to cope with so much material.

At about half one Jeremy and I walked back to the green outside the University Museum for the photo shoot. There we met up with Cheryl and Maria who were eager to see the outfit. Many photos were taken, including the following one (the composition of which I tried to describe to Jeremy): 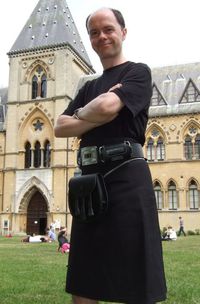 It was interesting the reaction I got from passers by. There were three, the "S.E.P" field, the quick look and move on and (on the green) the tourists for whom it seemed to make there day. Oh, and then there were Cheryl and Maria’s reactions, which were most positive.

There was one exception to all this positivity. My colleague wouldn’t even look at me and seemed highly uncomfortable when I got back to the office and asked her what she thought. She hastily beat an exit from the room. A very strange reaction indeed. She seemed fine later, after I’d changed back into my trousers. This does concern me as I don’t want her to feel uncomfortable, then again it’s not her place to tell me what I can and can’t wear as she would rightfully object if I did the same to her. Tricky.

I need a photo of me wearing as close as possible the sort of outfit I’m going to be wearing for the month so as to put it onto the JustGiving web site. So, seeing as I have everything I need at work at the moment I’ve come to the conclusion that I might as well try it all on and get photographed with the spire of the Oxford University Museum of Natural History in the background.

I’m thinking that seeing as I’m likely to drive into town after Badminton tomorrow night to collect the stuff I’d better do it at lunchtime. This would have the added benefit of a decent photographer being around, namely Jeremy Rowntree, as we play Mahjongg on Tuesday lunchtimes.

To save time (for Mahjongg) that will mean changing into the kilt etc. before lunch and going to the University Club for lunch wearing it. Well, I’m going to have to do that in July anyway, so I might as well get used to it now.

The kilts arrived this morning, delivered to work, along with the accessories.

I’m really surprised by the quality. They’re very well made and surprised that they can actually produce them and sell them for ~£40 and make a profit. They’re quite heavy too, but don’t feel too warm (I tried one on over the top of my shorts).

They are a tad too long, but seeing as this particular type only comes in one length, 24" drop, and I need 23" I wasn’t surprised by that.

As for the accessories, the sporran is functional, as is the belt, buckle and kilt pin. So, all in all a good purchase.

I’ve still to find socks to go with the outfit. I tried looking in a local outdoors shop for hiking socks. I found some which were longer than normal socks but they still only would come up to mid-calf. I may have to purchase specific kilt socks from the Scottish Kilt Company.

Who would have thought that the easiest parts of my kilt outfit to source would be the kilt and the special accessories to go with it?

Today I marched around Oxford trying to find the other parts of my outfit, namely long, black socks, an ID card holder on a sprung, retractable lead and a key chain. The last two will be needed due to the lack of pockets and the inconvenience of using the sporran for such items.

Well, I failed to get the socks, the item I thought the easiest to find. It seems that long socks are so out of fashion that no-one sells them. In this economic climate it seems that the unusual is never stocked. (e.g. trousers with 30" waist and shoes of size 7.)

I did, after some searching find the two other items, though the key chain was the hardest. Staples didn’t stock ID card holders at all. Thankfully, both W.H.Smiths and Ryman’s do, but they don’t stock key chains. I found one of those in Timpson’s, but it’s not quite what I need as I’d like a quick release clip rather than a fixed keyring on the end.

So, it looks like I’m going to have to wear short socks, unless someone can point me to a shop which sells long, black socks for size 7 feet.

I thought it about time I learnt the full power of CSS after dabbling a little using on-line reference resources and guessing the rest. Not really the most efficient way to learn, especially when you’re not sure of the definitions of the terms being used.

Anyway, so I’ve bought a book. Maybe, after reading this I’ll be able to modify both the WordPress theme CSS but also make my home page a little bit more presentable as well.

So far it does look straight forward (well other than the Internet Explorer hacks).

Well, it seems as if Summer has arrived early. However, if the last three years are anything to go by, May will be the warmest month and so this IS the Summer. Make the most of it! 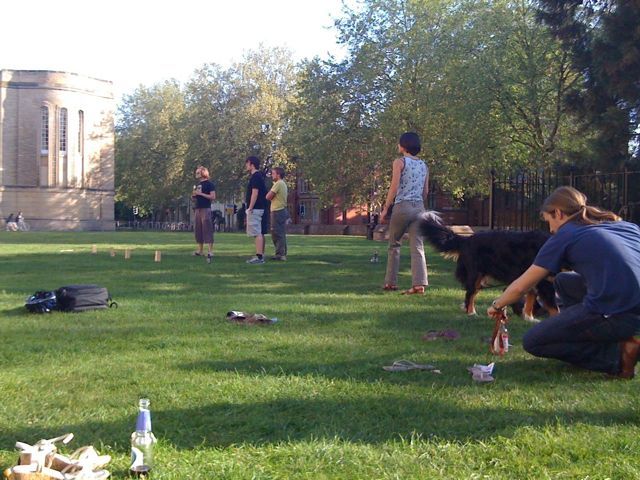 Than to try posting a random picture…. 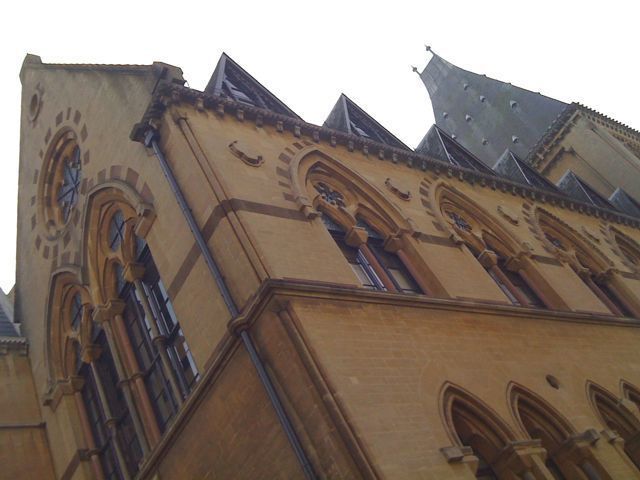 Well, things are starting to go on a pace.

I’ve ordered four polyester-viscose black kilts from The Scottish Kilt Company along with a cheap sporran, sporran chain, belt, belt buckle and, most importantly, a kilt pin. We don’t want any fly-away kilt flaps do we? The whole lot setting me back about £230.

I’ve not quite reached that amount on my sponsorship site (http://www.justgiving.com/Stephen-Usher) but at £225 it’s only just short!

Well, after some advice from Alec Muffett I’ve got WordPress configured in a manner which is reasonable, so I can release it to the world.

I must admit that adding a WYSIWYG editor for posting has made the whole thing a far more pleasant experience.

There are a few things I thing I’ll change but on the whole the simple, minimalist theme I’ve chosen fits in well with the minimalist home page I have.

“And so it begins.” Immortal words.

I’ve set this blog up mostly so as to document my up-coming sponsored kilt wearing event.

First of all, I’ve got to work out a number of details such as modifying WordPress so as to make it look presentable. I’ve also got to order four kilts and the accessories such as a pin or two, sporan, sporan chain, belt etc.