Just as I was closing the curtains in my bedroom before going to bed at around 10:30 tonight I noticed that the clouds were blowing away leaving a crystal clear sky and the Moon shining brightly. Having been waiting for just such a night for ages so as to take a photograph of the Oxford University Museum of Natural History by moonlight I gathered my camera and tripod and drove into town.

Now, until today there have been lots of 6′ high steel fences around the front of the museum ever since the morning after the gales a couple of weeks ago. Unfortunately, the workmen have left the day-glow orange fence around the lawn in front of the museum. Still, this may be the last time this year when the conditions are right (clear sky and a moon high in the sky and in the west during semi-civilised hours) this year so I had to take the chance.

I took 13 shots in the end, varying the focus (as it was too dark for the auto-focus) and the exposure. I think this, the last one is probably the best of the crop. What do you think?… 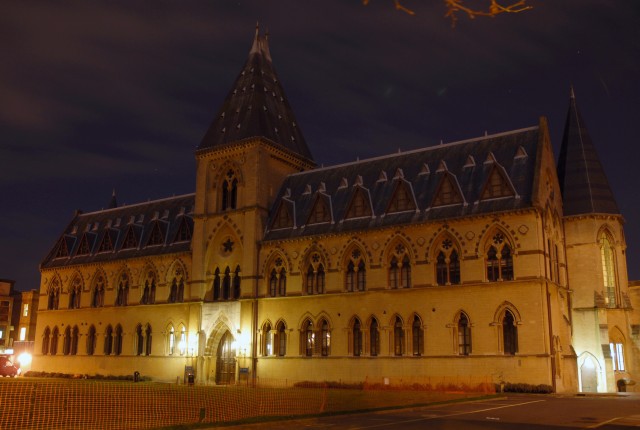 Updated
I’ve updated the image to a version after changing the colour balance and slightly cropping it.

I’ve just listened to an item on the BBC’s 6 O’Clock News about the mapping of dark matter using Hubble images. Within this item was a classic journalistic grabbing of the wrong end of the stick:

“Scientists shot a beam of light from the Hubble telescope and watched how it was bent (by the gravity of the dark matter).”

Of course, what the astronomers actually did was to examine the images of light sent out by the very distant objects and then modelled what shape of dark matter would generate those distortions. Part of this modelling would probably have been to run simulations involving ray tracing back along the line of sight with different configurations of dark matter. THis is probably what confused the poor journalist who probably had a media studies degree and no idea about astronomy or science in general.

Well, it’s been the last day of 2006 and not a great deal happened. The telly was really bad and the weather was worse. Could that be a good summary of the year gone by? Hmm. Maybe not, at least the weather’s not been too bad.

This time last year I had my holiday in northern Norway to look forward to and my Nan was still alive. My Mum was a bit better than she is now as she could at least sit and have a bit of a conversation for more than a few seconds.

So, what does the new year have in store? Well, other than some financial re-organisation, there’s nothing planned. I imagine that next year will be just like last, except without the trip. My Mum will deteriate further and my Dad will probably have even less time to do the things he feels that he should be able to do. Globally, I can’t see much changing for the better there with the current (and probable future) encumbents in the political spheres.

That all sounds as if I think that next year is just full of bad things but that’s not the case. It’s more that I see the new year as merely an indifferent continuation of the last 15 billion (if you can really measure time before the Earth oribited the Sun in years). Just like the Universe itself, it’s not good nor bad, it just is.