As discussed in a previous posting, I’ve been musing over the development of a modernised version of the classic procedural BASIC language, especially with the Raspberry Pi in mind.

With this in mind I’ve been setting out some goals for a project and working a little on some of the syntactical details to bring structures, advanced for-loop constructs and other modern features to a BASIC language as backwardly compatible with the old Sinclair QL SuperBASIC as possible.

So, here are the goals:

As I said earlier, I’ve been thinking about how to do a great deal of this syntactically as well. This is where I’ve got so far:

[Edit: The latest version of the following information can be found on my website. The  information below was correct at 10am 23rd February 2012.]

Variable names MUST start with a alphabetic character and can only contain alphabetic, numeric and underscore characters. A suffix can be appended so as to give the variable a specific type, e.g. string. Without a suffix character the variable defaults to a floating point value.

An array of structures can also be created using the STRUCTure command, e.g.

The values can be accessed using a “dot” notation, e.g.

As with standard arrays, arrays of structures can be multi-dimentional.

Structures can contain any number of standard variables, static arrays types and other structures. However, only structures defined BEFORE the one being defined can be used. Structure definitions are parsed before execution of the program begins. Structure variable creation takes place during execution.

The assignment and the evaluation of the assignment expression happen only once, when entering the loop. The test expressions get evaluated once every trip through the loop at the beginning. If the TO or UNTIL expressions evaluate to zero at the time of loop entry the commands within the loop do not get run.

WHILE expression [NEXT assignment]
…
[CONTINUE]
…
END WHILE

Equivalent to a FOR loop without an assignment using the WHILE variant e.g.

DO
…
[CONTINUE]
…
UNTIL expression

The commands within the loop are run until the expression evaluates to a non-zero value.

A function is merely a special form of a procedure which MUST return a numeric value. The suffix of a procedure determines its type, in the same way as variable names.

Parameters are local names with reference the passed values by reference. This means that any modification of the parameters within the procedure will change the value of any variables passed to it.

Variables created within the procedure will be local to the current incarnation, allowing recursion. Variables with global scope are available within procedures but will be superseded by any local variables with the same name. 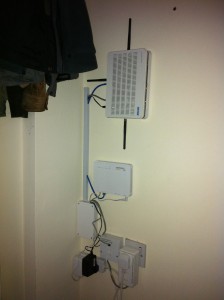 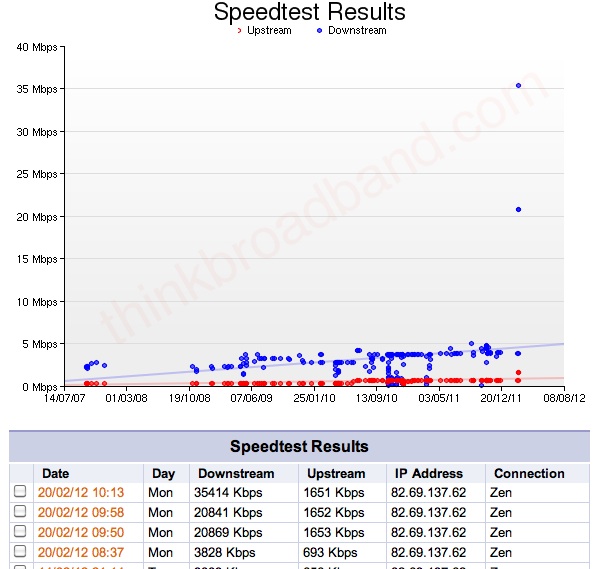 A recent experience has made me aware at how much pressure I feel about hiding my geekiness and how I’ve gained over the years mental defence mechanisms and automatic self-censoring of my expression so as to seem “normal” around others in social situations.

I have become aware that I have a semi-concious editor metaphorically sitting on my shoulder observing me and suggesting ways to avoid mentioning anything to do with SciFi stories, quotes from films or technology unless someone else mentions it first. There’s a constant feeling that I should hide this side of me.

I think a great deal of this comes from my experiences at school. I was never in the in-crowd. In fact, I was often shunned and left out of all groups and bullied. This meant that I gathered quite a few coping strategies over the years, one of which is an automatic dulling, if not total suppressing, of all emotion if I find myself in a stressful situation. It’s very probably a very unhealthy thing to have but it was the only defence I had so as to cope in many of those years.

During the recent experience I mentioned earlier I found myself suppressing the geek side of myself more and more, fearful that the person I was trying to impress would not accept that side of me. This became highly stressful.

I’d like to be able to release my inner geek and have “geek pride” but the defence systems are now so firmly ingrained that I fear I can never be rid of them, unless in the company of know geeks.

So, why does society have this reaction to geeks? Well, I imagine that it’s because they are different. The normal will always look on the slightly eccentric with suspicion. Of course, the most extreme end of geekiness can be rather anti-social, but so can the extreme end of the normal womaniser or the normal alcoholic.

Anyway, it’s sad, but that’s the way society is. I’ll just have to try to deal with it and interface with it on its own terms.

Having tried Internet dating for some time and getting absolutely nowhere it was interesting to read about some research done in the USA into how this technology is being used and seen by those using it. The results definitely resonated with my experience and those I’ve talked to who have also tried it.

From my own experience and that of those of the opposite sex I’ve talked to (except for a couple of notable exceptions) it seems that the great majority of both men and women who frequent the sites treat it more or less like an on-line shopping experience, with all the consumer ideas of the perfect product which this entails.

There does seem, however, to be a marked difference between what the two genders seem to be looking for in this retail experience.

As for the women, there seem to be two types on the sites, those looking in the most part for a perfect, boxed, shrink-wrapped “bFriend 2” with money-back guarantee and those with children who seem to be looking for an emotional crutch and child minder. Those who are the most picky seem to be the ones who have been through a divorce. This is understandable in a way as they don’t want to submit themselves to the same hurt and pain as they’ve experienced in the past.

The majority of the men are looking for something very different. They seem to see dating sites as seedy singles bars with needy women ready to do anything for “love” and this, from the shocking stories I’ve heard, mostly seem to involve kinky sex.

So, what about these sites which purport to offer a “scientific” matching system. Well, as the report mentioned above put it, they’re not exactly scientific. I’ve filled out the whole slew of personality profile questionnaires and very often the “matches” it gives (from the very small selection available) are very often laughable.

In addition, the advertising intimates that there are thousands of members of the opposite sex just waiting to get in touch with you when you join. Well, there are thousands of members, possibly thousands which match your criteria globally. However, if you trim it down to those who are actually within a realistic distance to make the logistics work and then filter out the vast majority of the members who are inactive (or merely spam-bots) you get down to a very, very small number, in the low hundreds, more likely in the tens. New member seem to appear in quite small numbers too, probably no more than five a week, on a good week, and most of those become disillusioned so quickly that they can be thought of as inactive members.

What’s even more problematic is that all these sites charge an exorbitant amount of money per month for this “service”. I have no gripe with paying for a service but some of these sites charge nearly £20. There is no way that a simple web interface to a database and some simple data extraction logic should cost this much to run. It’s close to being a scam.

So, in these days of isolated, static social circles what is the possible alternative for those who wish to find a partner? Actually, I’m not sure these is one. Internet dating seems to be the only game in town, even if it it is close to useless.

Well, Mars is finally getting into a position where I can image it at a reasonable hour of the day (or night).

So, ths evening I had a doze in bed for most of it before getting outside and attempting to get at least one image of Mars.

Mars is rather more difficult to image tham Jupiter due to it being far smaller. Thankfully, for Christmas I got a 5x magnification lens which allows me to make the image on the “webcam” camera large enough to even attempt the task. Even so, with the degree of atmospheric disturbance I never thought I could get anything decent tonight.

Well, surprisingly, after a bit of processing in Registax, this is what I managed to obtain: 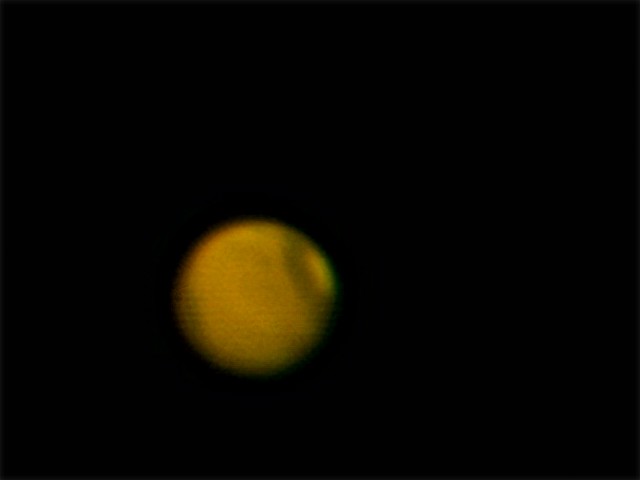