So, it’s been almost a week since the arrival of the iPhone 4 on the doorstep and with all the hoo-hah in the forums and the press I thought I’d give my opinion on the device an actual use. It should be noted that my previous smartphones have been the Handspring Treo 600, Palm Treo 680 and iPhone 3G so I do have quite a background in the use of the things from really their first iteration.

Well, lets first get down to the big issue of the moment, the reception problems. Yes, there is a problem but it’s nowhere near as bad as made out by fanbois and Apple-haters. I often hold the phone in my left hand and if I merely make sure I hold it very slightly higher than I usually would (by about 1cm) my palm misses the area of the insulating gap, problem solved. My advice to those who are complaining is to grow up, get a life and move on. All technology has flaws, it’s inherent in the structure of the Universe that it’s a compromise, tough, live with it. If you’re REALLY bothered with it then put a 1cm strip of sticky tape over the area of the gap. Even if you then bridge that gap then the resistance of your skin will be enough to attenuate the problem to a tiny value.

Having said that, there is a bug in the radio part of the software which I’ve discovered. Here’s how to reproduce it:

You will now find that even when you go into an area with strong signal the phone won’t be able to pick it up. To fix this you will need to turn Airplane Mode on and then off again to resume normal operation.

Other than these two problems I’ve not had any others and the device has been fast and rock solid.

In general use the whole thing is a pleasure to use. The screen is beautiful and has a very wide viewing angle. iOS4 is merely an evolution of the iPhone OS so that works practically the same as previous versions, i.e. slick. The web browser, Safari, is actually fast enough to use now on sites with complex CSS. On the iP3G some sites would take almost a minute to render with a fast WiFi connection but on the iP4 they take less than 5 seconds.

The camera system works and produces pretty good images. Not quite up to dedicated camera standards but not far off. The only criticism I have with it is that the colour balance tends to over emphasise reds or give a red hue to the whole image. The videos produced are pretty good as well, better than my FujiFilm FinePix F31fd compact camera can produce. I’m not saying that it’s dedicated cam-corder quality but definitely usable and the microphone hardly ever picks up wind noise.

As for the battery life. Well, the iPhone 3G in the area I have been this week would last just about 24 hours on a charge or, if I’m playing Bejewelled 2 a great deal, about 5-6 hours. In comparison the iPhone 4 generally drops 1%-3% per hour (I can’t give a percentage for the iP3G as it doesn’t have a percentage measure) which would put the battery life in the region of 30-90 hours. When playing Bejewelled 2 the battery is depleted by about 10% per hour, so that’s about double the life of the iP3G. Therefore, it’s not quite in the same league as the Handspring Treo 600, which lasts about 10 days on a charge in normal use, but it’s certainly getting close to the life of most non-smartphones. (It’s also infinitely better than the Palm Treo 680 which would struggle to last 8 hours on a charge.)

So, there you have it. The iPhone 4 works and (other than one flaw which is easily worked around) works well and is a definite jump in usability over the iP3G, especially in terms of speed, screen and battery life. 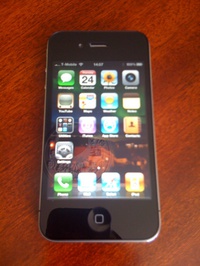 Well, my pre-ordered iPhone 4 arrived this morning and after cutting up my T-Mobile SIM (and trimming it to get the contacts to be in the correct place) got it registered and synced up.

So, was it actually worth upgrading from the 3G to the 4?

Well, iOS4 on the 3G is a bit sluggish at times, probably due to having to page so much in and out of its tiny 128MB of RAM (as opposed to the 512MB in the 4). The screen on the 4 is very much better to view, but the 3G was usable. Oh, and I could reliably crash the 3G by downloading the iOS4 manual PDF in Safari and then trying to transfer it to iBook. After about 30 seconds the phone resets.

Also, the iBook app is a little flaky, as quite often it will say that a resource isn’t available when trying to open a book and close the book again. It can take several attempts to open it.

Of all the other stuff in the 3, the sensors are the biggest addition (as well as the uprated camera system, but this isn’t much of a draw for me). It allows me to use Pocket Universe the way it’s meant to be. Also, the GPS location system is far more rapid. Instead of about a minute or more to find the location, it’s now almost instantaneous.

The device is very fast (at least for now).

Yes, the biggest “feature” is that if you hold the left-hand side of the phone the mobile signal decreases markedly. This does not happen if you hold your hand around the case, only if you touch it. So, I think my first purchase will be a “bumper” case. Nothing else comes to mind so far.

I can say without dubt that the new iPhone 4 has a far better battery life than the 3G. So far, with WiFi, Bluetooth and 3G enabled and with e-mail polling every 15 minutes only 3% of the battery charge is being used an hour. That means that even with this load the phone can survive for ~30 hours on a charge. With just GPRS, no polling and the other wireless services turned off I can believe the claim of 10 days stand-by time claimed, equalling the Handspring Treo 600. Well done Apple, a decent battery life at last.

Having picked up a friend, Carl, at Oxford railway station on the way we got to Bletchley by about 10:45 and parked in the station car park (which is surprisingly 50p cheaper than the on-site parking on a Saturday). Having walked over the road Carl bought his ticket and I picked up my National Museum of Computing membership pack.

As this was the first time Carl had visited Bletchley Park the strategy for the day was to do a quick wander around the whole place initially and then later focus upon the things of interest.

So, other than the usual Bletchley Park exhibits, what was there at the V.C.F.?

Within the mansion there were a number of exhibits, including “Acorn World”, a retro-gaming room, an Amstrad/Sinclair room and talks. We didn’t book ourselves into any of the talks so I can’t comment upon those. However, the other exhibits were quite interesting, with a great deal of hands-on displays. And who would have thought that someone would have created a USB and Compact Flash card interface for a BBC-B?!

The one type of machine notable for its absence totally, the Atari ST. There were a few Atari 800XLs and one or two Atari games machines (including a Jaguar). Very strange.

Anyway, other than the exhibits within the mansion, on the lawn opposite was a large marque holding mostly Amiga stuff (including another futile re-launch of AmigaOS) but also the local BCS collection of machines. Also, just outside the National Museum of Computing, was the “flea market” and eclectic tent. Not only were there stalls trying to flog BBC micros for £40 each (yikes!) and the R.W.A.P. stall selling everything Sinclair but also at the other end of the tent some very eccentric people with equally eccentric projects.

So, if you want and ethernnet interface for your ZX Spectrum and Twitter client you could pick one up there. Or maybe you’re interested in a plug-board, reverse engineered ZX Spectrum ULA, with a fully operational Spectrum clone attached to it. (The person who did it has written a book.) Or, even a recreation of the original Sinclair computer, the MK14?

All in all, it was quite a fun day out… oh and the stuff in my loft is obviously becoming quite valuable!

This evening I updated the site to WordPress version 3.0. I must admit that I can’t see much of a difference at the moment and none of the stuff shown in the video seems to have appeared. Maybe it needs a restart or something?

Well, this last weekend was a Bank Holiday and my parents had come up from Cornwall to see me. Unfortunately I managed to pick up a rather nasty flu virus which started to show itself the evening they arrived, last Thursday.

Initially I merely thought it a minor cough and it wasn’t really until Saturday morning that it really hit me. From then on, until today really, I spent most of my time in bed. Not a great way to entertain my Mum and Dad. Not only this but I’ve also managed to pass on the infection to my Dad.

So, a Bank Holiday to forget really.