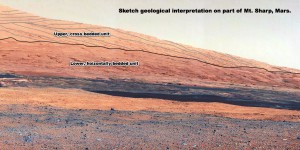 Having seen some of the glorious images sent back by NASA’s Curiosity (Mars Science Laboratory) rover and the rather (geologically) uninformative BBC News and NASA/JPL reports upon them I thought I’d create a geological sketch interpretation. So, here it is:

Horizontally bedded rocks on Earth are generally laid down in water, so the lower unit was most likely to have been deposited in a wet environment.

Large scale cross bedded rocks are usually sub-arial wind-blown deposits, as in sand dunes. The bedding being the shadow of the trailing slope of the dunes as they march across the landscape. What you see left behind is the root of the dune.

The scale in the image is hard to gauge but seeing as the scarp is a couple of miles from the rover, the size of the dunes which generated the cross bedded units must have been many hundreds of metres high.

It should also be noted that the top of the lower, horizontally bedded unit seems to be an uneven erosional surface, suggesting a large time gap between the lower unit’s deposition and that of the upper unit.