As mentioned in a previous post, I’m recently bought a new telescope with the thought of using it for astrophotography.

Now, seeing as the last part of the order turned up a little over a week ago, the equatorial wedge, I’m finally in a position to start on the project in earnest. To this end I went out shopping on Saturday for a camera and a machine to drive the camera and the ‘scope.

Having read quite a great deal and seen images which other people have managed to take, I opted for the Nikon D90 as the camera body to obtain. Currently, it’s probably the best time to get one of these cameras as it is about to be replaced by the D7000 and hence the street price is at its lowest. Waiting for the D7000 to appear would be counter productive as it will not only be at a premium price which is almost double that of the D90 but also doesn’t have anything really to help with the task at hand. (The main improvements over the D90 are in the realms of auto-focus and a more robust, and heavier, body.)

Unfortunately, because it is about to be replaced it is becoming scarcer, which meant that I could only find it as part of a kit with a lens I don’t actually need. Oh well.

On the control machine front, I picked up a netbook. The twin-core, 1.6GHz Atom processor powered Acer Aspire-One 533 should be ample for the task. There’s not a great deal of processing power required to control the camera, acquire the images or run Stellarium or similar to drive the ‘scope. I just need to get a serial cable now.

Anyway, Saturday evening was a beautiful evening with crystal clear skies, which gave me a good opportunity to have a first experiment.

The results? Well, OK for a first attempt. It’s very difficult to get a good focus when looking though the viewfinder. My first target was the Moon: 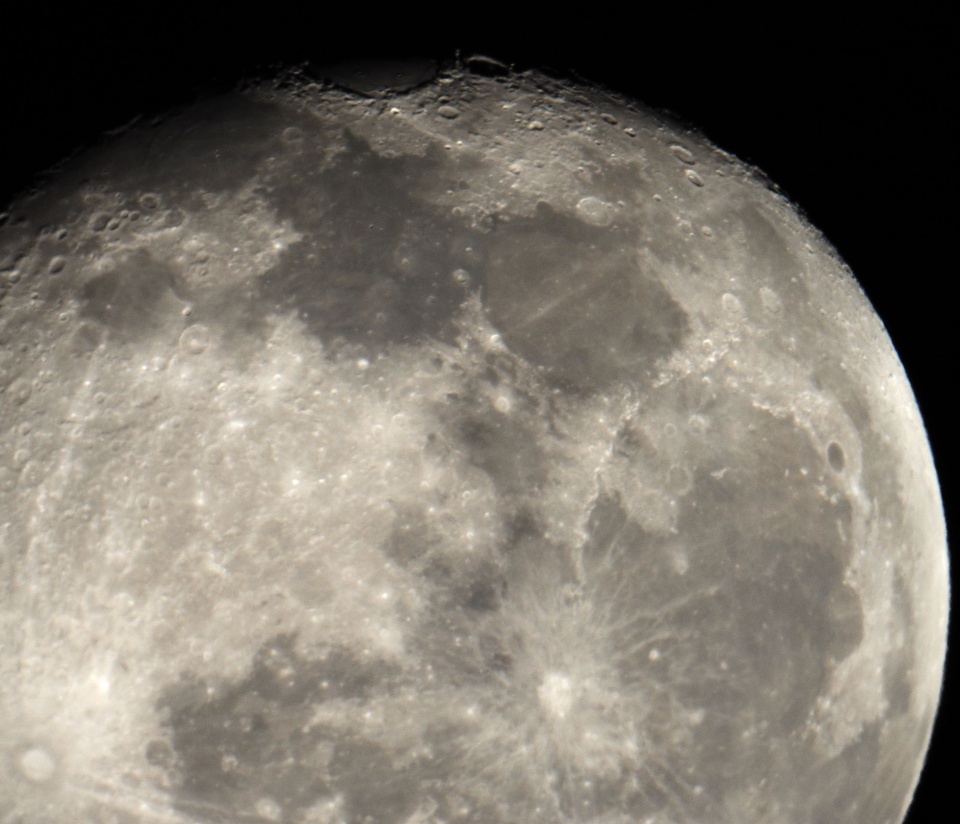 Not too bad for a first attempt…. Then over to the Dumbell Nebula: 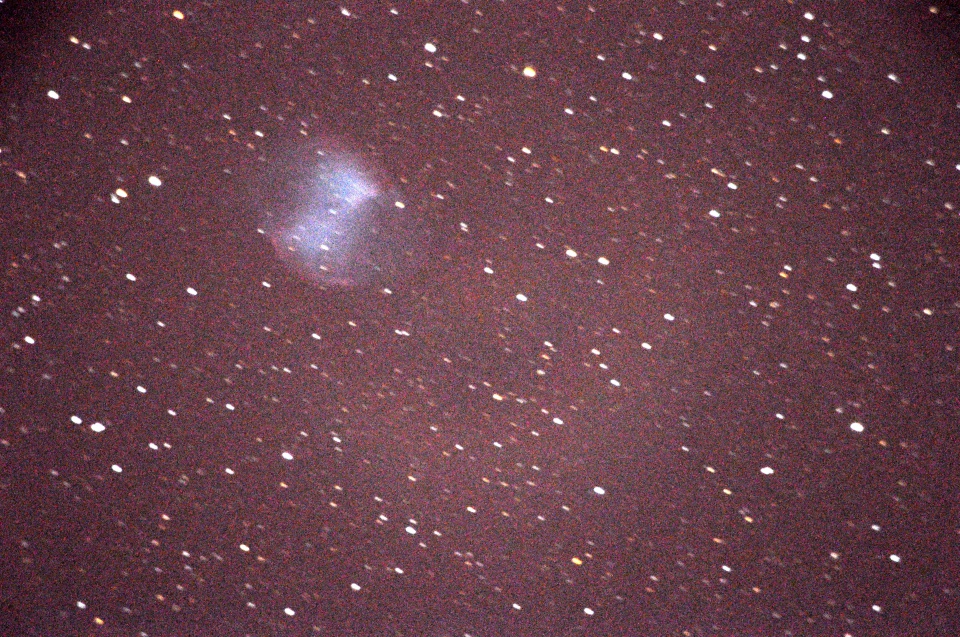 As you can see, this 60 second exposure really shows up the problem with light pollution in the area I live. I’m going to have to look into getting a light pollution filter.

Finally, I spent a little while trying to image Jupiter. The best I managed was this: 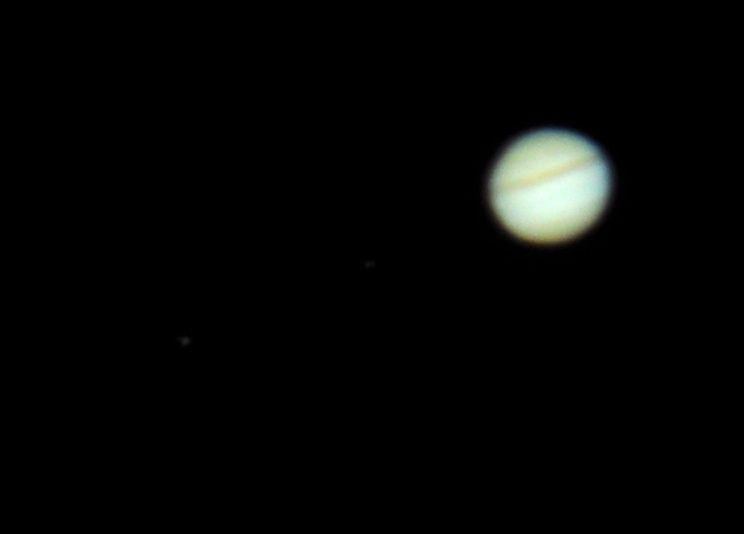 I’m definitely going to have to look into ways of getting a sharper focus. Not all of the fuzziness is caused by atmospheric disturbance.

Anyway, following on from my photographic exploits I noticed one of the Jovian moons, Io, coming out from behind the planet. It’s amazing but you can actually see it move relative to the planet with the gap visibly changing in only seconds. It must be moving at quite a speed.

Still, I’m not likely to get another chance to play in the near future, looking at the weather forecast. The next items on the shopping list: landscaping with paving and a rolling roof observatory such as this: 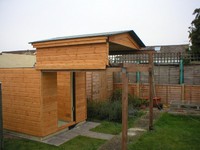 Yesterday was the last day of the move of the University of Oxford Department of Earth Sciences from the building(s) it’s occupied since 1948 to the new building just around the corner. (The chemistry labs are still situated there until November but the building is now technically “owned” by Chemistry.)

This was the end of an era for me as well. I was the first person to move into the extension in late 1992, getting key number 139, and my office was one of the last to get moved out as well. So, I’ve certainly been the longest resident. Yesterday I handed that key back for the very last time, after having it in my pocket continuously for 18 years almost to the day. The end of another era.

The new building is very different from the old one. It’s light and airy but also more “corporate” and soulless. One real benefit is, however, that the common room is on the roof and last night, at the weekly Happy Hour, it was very pleasant sitting on a sofa with only the spot lights switched on watching the nearly full Moon climb above Headington Hill intermittently shrouded by scudding, silver-rimmed clouds and the sky changing from a light turquoise to a dusty dark blue over the period of an hour or so.

Still, the only constant in life is change and I can see that the new building *IS* an improvement in many ways from the old one. There are things the old building had which were better, such as a larger library, but on the whole there are fewer of those than than the new one’s advantages. Let’s just see how things progress…

I’ve just taken delivery of a new Meade 8″ LX90-SC telescope and tonight had the first chance to take it for a spin, as it were. This is despite the British weather trying its best to get in the way. Still, the breaks in the cloud were big enough for me to align the ‘scope.

I have been surprised by the contrast between this ‘scope and the one I bought for my Dad the Christmas before last, however. That ‘scope seemed to be a Friday afternoon job. It arrived with the wrong type of Autostar controller and the battery boxes weren’t (and still aren’t) connected properly. Also, it was far harder to get it to align properly and never seemed to do so accurately enough. His ‘scope is a 10″ Meade LX90-ACF (i.e. has the more expensive optics).

My new ‘scope, on the other hand, seems far better put together. Other than a slightly bent bolt on the tripod, which is used to hold the ‘scope on the tripod, everything is in good working order. Not only this but the alignment process actually works and works well. I think this is partly helped by the replacement of a electronic compass and level (which never seemed to work) with a good, old-fashioned compass with a bubble.

Just to show how good the alignment and calibration was, I set the ‘scope to point at Jupiter about 10 minutes before it rose above the roof of a near-by house. (It also happened to be in cloud as well, but that’s beside the point.) When it did appear it was right in the centre of the field of view. I didn’t need to tweak it at all. This never was possible with my Dad’s ‘scope.

Also, the image was a great deal better than with my Dad’s ‘scope, and the magnification seemed higher (with the same type of eye-piece), even though they’re supposed to have the same focal length. This was very unexpected as the ‘scope is smaller and has the cheaper optics.

Am I happy? Yes. Other than the minor problem with the bolt, which makes it slightly more difficult to set the kit up and dismantle it again, it’s actually better than I expected.