On Friday afternoon an old friend posted on my Facebook wall a link to an article about a new supernova discovered on Thursday in one of the arms of the Whirlpool galaxy (M51) and wondered if I’d seen it.

Fortuitously, Friday evening was practically the clearest sky I’ve seen in Oxford so after Saturn became eclipsed by the house roof (which now happens annoyingly early) I decided to have a go at imaging it.

After I having to re-aligned the telescope, as the LX90 mount doesn’t seem to take care of accumulated pointing errors very well and was hence pointing in the wrong part of the sky, I managed to get on target. I swapped the eye-piece for the camera, found a nearby bright star to get focus and then moved back onto the subject.

I tried a couple of exposures, all taken using an infra-red remote control so as not to cause the ‘scope to bounce around, but only one of these was usable. The trouble is that the LX90’s mount isn’t that good at tracking the sky either, even with an equatorial wedge. It seems to jerk forward randomly every minute or so making exposures longer than about a minute practically pointless. Still, with the level of light pollution, even a minute’s exposure creates a mostly orange image.

Anyway, I had one usable image… 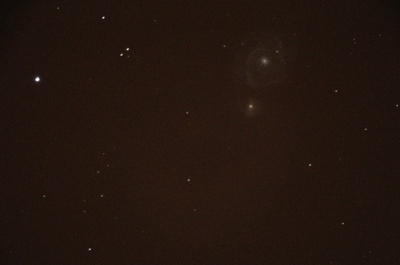 As can be seen, the galaxy itself is quite a subtle feature, mostly obscured by the reflected glow of the Oxford light pollution. So, the next task was to try to filter this out and enhance the galaxy within the image. I did this by adjusting the colour curves for each of the three colours and then adjusting the overall curve. 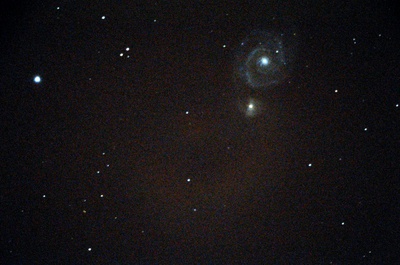 As you can now see, the light pollution has been greatly subdued and the galaxy stands out far greater. You can still see an artefact caused by the optics of the telescope, the subtle ring of orange with a bright dot in the centre, but this can’t easily be removed.

All that needs to be done now so as to make it an instructive image is to crop, flip (so as to remove the inverting of the image caused by the optics) and annotate…

And there it is!

Not quite as good as you’d get from a professional set up but adequate to show the supernova.