So, it’s coming to the end of another weekend.

This last week has been chocked full of conferences, mostly not ones I’m attending in any other capacity other than techical support. The first two days were the graduate mini-conference where 1st and 2nd year postgrads gave talks on thier research so far. (I got free lunch). Wednesday was a day off from conferences. Thursday was the IT Support Staff Conference, which I attended as an attendee.. and another free lunch (stuffed guinee foul with fennel stuffing, vegiatbles and salad followed by summer pudding and cream). Friday morning was the 4th year undergraduates’ turn for a conference, talking about their projects. It’s surprising how exhausting listening to talks is!

Anyway, add to this socialising on Thursday evening and the annual finalists’ party on Friday night and I was shattered by the time the weekend came around.

Still, my new big zoom lens arrived on Thursday, after ordering it Tuesday evening. I didn’t get to play with it at all until Friday lunchtime and it was only yesterday that I really had a good change to try it out, even if it was restricted to around my house.

Here are some sample images:
Firstly, Alec, can you identify this bird?… 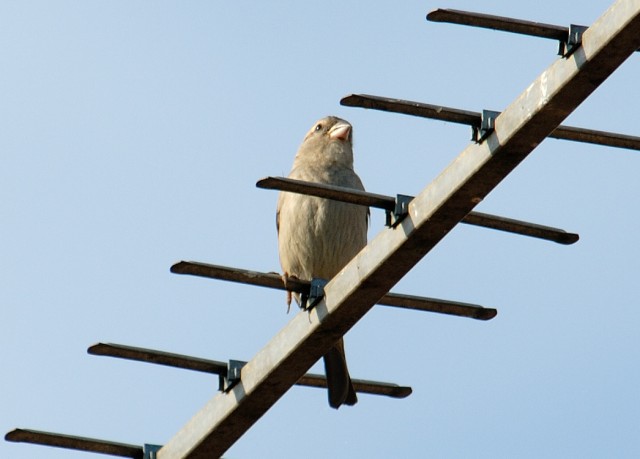 The best image of Jupiter I got last night… 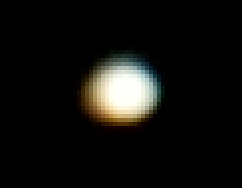 The best image I got of Jupiter’s moons last night…

As you can see, the resolution and sharpness of this lens blows that cheap Sigma out of the water.

Yestderday I got tempted into HMV by their “Up to 70% off” sale. Hmm.. OK, I’m sure one thing they couldn’t sell was at 30% of the original price but I didn’t see it. Still, I did pick up the “Back to the Future” trilogy for £12.99 and three CDs for £6.99 (Gorillaz – Demon Days, Cyndi Lauper – Time After Time: The Best of and Goldfrapp – Supernature). I do like that Goldfrapp album. I may pick up their previous one. Anyway, other than the lens testing and shopping the resto of the day was spent listening to the CDs and viewing the special features on the bonus DVD. I didn’t go into my front bedroom and listen to the Elton John concert which was going on at the Kassam Stadium (other than for about a minute while searching for something).

I was going to go out today and play with the lens more with some more interesting subjects, but I just haven’t had the energy. I woke up at gone nine this morning and flaked out again just after midday. I had another sleep for a few hours this afternoon and am finally starting to feel human. I’m sure this is not at all helped by the fact that I think I have a mild form of hay fever at the moment.

Hmm… it’s ten to six… I wonder if that football’s finished yet.